I’ve always wanted to make my own croissants as I just love them. Shop bought are OK, but when my boyfriend took me to Paris last Christmas we got to eat the real deal and they were amazing. I really got a taste for them and have spent the months since that trip searching for a recipe which is as good.

I’ve read so many recipes and reviews on other people’s recipes to see if they were worth making. It isn’t a quick process, by any stretch of the imagination, they take about 2 days to make, but are definitely worth it as they taste far superior to ones from Sainsbury’s etc.

after reading through it at least ten times and reading how Joanne too had spent years perfecting the art of croissant making. They turned out so well for a first attempt, since I haven’t made another recipe I don’t know if these are the best ever, but they were amazing and I would make them from this recipe again, I may try other recipes to compare, but I know these are gorgeously flaky and buttery so if I don’t find another recipe I love, then I’ll know these are the ones!

It’s a really long process and since I’d never made them before I followed every single step and even measured the dough when the instructions said it had to be a certain size. I have no idea if there is a shorter way to make them, but this method worked for me, no matter how long it took I think this added to the finished product.

Recipe from Flour by Joanne Chang

Makes 10 croissants with a little dough left over

> Place the milk and yeast into a large bowl or the bowl of your stand mixer.
> Mix until the yeast has dissolved.
> Add in the flours, salt, sugar and 28g of butter. > Mix for about 5 minutes until a soft dough is formed. Sorry got carried away and took an arty shot 🙂 > Once the dough is formed place it on a baking tray and cover it in cling film loosely. Place in the fridge for 6-12 hours. The dough will rise slightly.
> After chilling, lightly flour your worktop and turn the dough out. Press it into an 8 inch square. > Place the cold butter into a small bowl.
> Cream the butter. > Turn the dough so that it looks like a diamond. Make a 6 inch square in the middle of the dough using the edge of your hands.
> Push out the corners of the dough to make a more square shape, about 3 inches each.
> Place the creamed cold butter into the centre of the dough. > Fold one of the flaps over the butter. > Go around and fold each flap towards the centre, covering the butter. You will need to stretch the flaps so you end up with a rough square shape.
> Firmly press down on the dough to create an 8 inch square again.
> Using a rolling pin, bash the dough in a line up and down to squash the butter into the dough a little. > Now roll the dough into a 10 x 16 inch rectangle, you will need to add more flour to the work top to stop the dough sticking.
> Have the dough with the long side nearest you and score the dough directly in the centre. > Lift the right side of the dough and fold it towards the middle so it lines up with the scored line.

> Repeat with the left side. > Place the dough back onto your baking tray and cover with cling film again, this time tucking the cling film underneath the dough.
> Place in the fridge for 1 1/2 to 3 hours. After chilling, flour the work top and place the dough onto the worktop with the long side nearest you.
> Roll the dough out until it is 18 inches long and 12 inches wide.

> Score the dough into thirds.
> Fold the right third into the middle third. < br />> Fold the left third into the middle third. > Place on your baking sheet, cover in cling film and then place in the fridge for 4-16 hours. I left mine for the full 16 hours.
> Take the dough out of the fridge and line 2 baking sheets. The recipe says one, but I liked having mine really well spaced out.
> Lightly flour your worktop again and place the dough out with the long side facing you.
> Roll the dough out so it is 30 inches long and 6/7 inches wide. Mine was 6 inches wide.
> I totally admit I used a tape measure for the next bit. Measure 5 inches from the bottom left and score it with a 1 inch line. Continue measuring and every 5 inches score the dough.
> Now measure 2 1/2 inches from the top left, this should be halfway between your bottom mark. Make a 1 inch score. Now continue along the dough making a mark every 5 inches. The top marks should be in the centre of 2 of the bottom marks.
> Using a very sharp knife, cut diagonally from notch to notch so you end up with 10 triangles. You will have a left over piece of dough from the top left and the bottom right.

> On each piece, now cut through the 1 inch score which will be at the widest part of each triangle. > Gently pull each triangle so it is 10-12 inches long (mine were 10), stretch the base so the slit becomes wider and the dough is shaped a bit like an Eiffel Tower. > Pick up the two bits either side of the slit and roll the dough down to its point.
> Repeat until all the croissants are done and then place them point down on the baking trays. > Cover loosely in clingfilm and leave somewhere warm for 2 1/2 hours. I think my kitchen was a tiny bit too warm as a little bit of butter leaked, it didn’t really affect the finished product, maybe a few layers were lost.
> After 2 1/2 hours they should have puffed up a bit and wobble a bit like jelly. > Whisk the egg in a small bowl and then brush it onto the top of each croissant. Cover with clingfilm again and leave for another hour. Don’t throw away the egg, you’ll need it again later
> During this time, preheat the oven to 200 degrees C.
> Once proved, brush each croissant with the egg again.
> Bake at 200 degrees C for the first 5 minutes and then turn the oven down to 180 degrees C.
> Bake for another 25-35 minutes until golden brown all over. Mine only took 25 minutes.
> Remove from the oven and leave to cool on the baking trays for a couple of minutes. You can serve immediately, but I’m sure most people won’t eat 10 croissants as soon as they’ve come out of the oven. > Transfer to a wire rack to cool completely if not serving immediately. > Once cooled they can be stored in an airtight container for 4-5 days, they keep remarkably well and only need about 3-4 minutes in a warm oven to make them taste fresh from the oven again.
> There we have it, an awful lot of effort, but some awfully tasty croissants to eat after the slog! Entered into What I Ate Wednesday at Peas and Crayons and Thursday’s Treasures at Chocolate, Chocolate and More 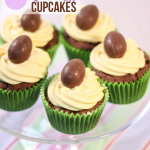 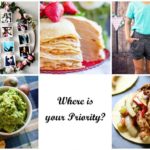 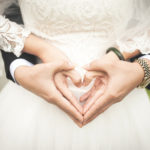 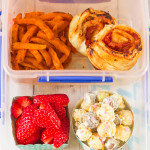 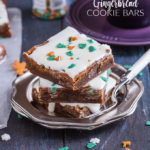 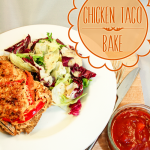