So…. I used Pumpkin for the first time a couple of weeks ago and these were the result.

There’s something you should know about me. Every year I hollow out a Pumpkin and spend hours picking out all of the seeds so I can oven roast them and then dig in. I adore pumpkin seeds, but the flesh? Not so much. That ends up in the bin… Butttttt after finding the one supermarket in the UK which stocks Pumpkin Purée I was determined to get baking with it to try and change my mind on it.

I don’t think I could just eat it with a spoon, but it definitely adds an extra something and I was really surprised by how much I loved these cupcakes. I’ve seen sooooooooooo many Pumpkin recipes recently, on Instagram, Pinterest.. everywhere. So I wanted to see what all the fuss was about!

My boyfriend was like, “No, I doubt I’ll like them, I don’t like pumpkin”, but I was like “I don’t either, but I love these cupcakes” – then he tried one… and then ate 3 more in quick succession. Following on from my Perfect Vanilla Cupcakes, I thought I’d show you how you can switch things up and end up with these beauties…

I took my base recipe and adjusted it to make it perfect for these cupcakes. There’s a little less sugar, but it’s light brown sugar which adds an extra note, I just love light brown sugar!

Instead of milk, I’ve used the Pumpkin purée and I’ve added spices and chocolate chips.

It’s official, I’m a pumpkin convert (in baking, at least) and keep your eyes peeled for some other pumpkin recipes coming up over then next month or so!

You need these in your life, topped off with the light and fluffy cream cheese frosting, these are just perfection. *Normally, I would advise the use of butter, but in this recipe margarine results in a more moist cupcake. **Up to 1/4tsp nutmeg, this is down to personal preference, I'm not mad keen on nutmeg and made it with less, but I made them again with 1/4tsp and my boyfriend loved them. 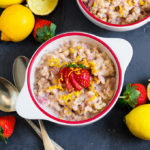 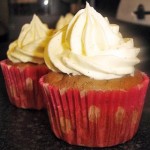 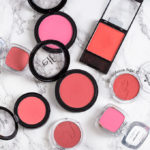