My “Skinny” Raspberry Cheesecake Cups don’t taste skinny at all! Packed with the flavours of fresh raspberries, cream cheese and agave nectar – these will become your new favourite treat – and your skinny jeans will love you too! What are you allergic to that just makes you go “really?!?!”

I used to think I was allergic to tomato ketchup, which would have been a tragedy, but it seems that I’m actually allergic to a herb in some ketchup recipes – still haven’t figured out which one.

Seriously though… I’m always asked if I’m having dinner with my ketchup as I have so much, so my life would have been over if I was allergic. Now, you know how much I love granola – this, this and this proves that… but there’s another reason I have to make homemade granola and that’s an allergy to nuts. That’s fine, I’m used to that…

BUT, recently I’ve started having the most horrendous reaction to honey. Pretty much as soon as I have it I’m sick and get stabbing pains in my stomach as well. It’s ridiculous.

Because of this I’ve been left contemplating what else I can use – I’ve been hearing loads about agave nectar recently – I know it’s sweeter than honey, but also not as thick, so I began my hunt for some! I managed to get hold of some agave from a Health food store online and wanted to see how it works in baking. I already had the idea for some raspberry cheesecake cups and was just going to make them as I normally do, but after tasting a little agave on my finger, I thought it would taste really nice with the tang of cream cheese.

Boy, was I right! Since I was using agave, I decided on making the rest of the recipe slightly lighter too.

I’m not normally one for lighter versions of things, but I love light Philadelphia – it’s just as creamy as the full fat version and I can’t really notice a difference.

I’m also having a major love affair with Greek Yoghurt at the moment and decided on adding 1 cup of yoghurt to this recipe – it adds a delicious tang and makes the most creamy, smooth cheesecake I’ve ever tasted! These are so simple to make and they taste just like the full fat version. The raspberries add sweetness and even with the agave you still get that tang that everyone loves in cheesecake, it doesn’t overpower anything.

I made these cheesecake cups twice with different bases, once with chocolate covered Hob Nobs and once with traditional Hob Nobs – OH and I loved both, but we both thought that the normal Hob Nobs were better – it’s a nice change to a traditional digestive/graham cracker base and adds another layer of texture which contrasts with the velvety smooth cheesecake.

Of course you can use digestives/graham crackers if you want a normal cheesecake base, but the oaty bits and earthy taste of Hob Nobs do work magically with the cheesecake layer!

So, go make these ASAP! And relish the fact you don’t have to feel too guilty eating one! 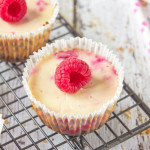 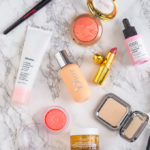 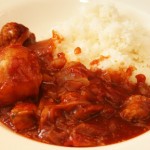 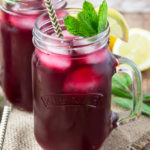 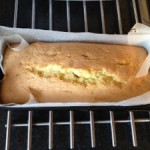