Cooked pears, whipped cream, melted chocolate and soft shortcakes marry together to make these incredible Chocolate and Pear Shortcakes; a twist on the traditional shortcake and just as delicious!

Hiya everyone, I have one seriously delicious recipe for you today: Chocolate and Pear Shortcakes! I am obsessed with shortcakes and constantly coming up with different flavour combinations because why should shortcakes only be made with strawberries?!

I love chocolate and pear together, so I thought to myself, why not make the flavour combination into a shortcake?!

Let me tell you, I’m so glad I decided to make these shortcakes because they are sublime. Let’s get into how to make them!

Now, don’t be put off by the fact there are quite a few steps to making these. That may be the case, but they’re actually very easy to make and not something that needs to look perfect. If they look a little rustic, then they’re perfect.

To begin with, I made a rich, soft chocolate shortcake. I took my base shortcake recipe, which I’ve used for years, and tweaked it to make it chocolatey. I added cocoa powder, a bit more cream and a bit more sugar to balance the flavours and help make sure the cocoa powder didn’t make the shortcakes dry.

After that, you bake the shortcakes and let them cool, while you make the filling.

I sliced up 4 pears, placed them in a pan with sugar, water and cornflour and cooked them until the sauce was thick, caramelly and the pears were tender. I then let that cool whilst I made the sweetened whipped cream.

The final step is to melt some milk chocolate and place it into a small Ziploc bag. After that, it’s time to assemble these Chocolate and Pear Shortcakes!

To assemble you have to slice the shortcake, spoon on some sweetened whipped cream, add the sweet pears, drizzle some chocolate, place on the lid and finish off with another drizzle of chocolate before digging in!

My husband absolutely loved these Chocolate and Pear Shortcakes, he said they were his favourite yet! The chocolate shortcakes are rich, not overly sweet and so soft. The whipped cream is light and fluffy, the pears soft and tender and then melted milk chocolate? Well that’s the cherry on the top!

I really hope you get to make these Shortcakes and love them as much as we did! 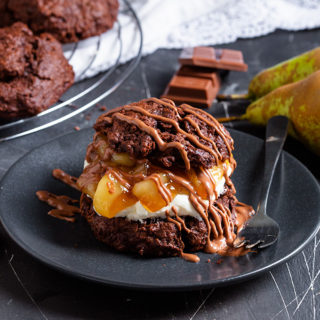 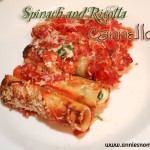 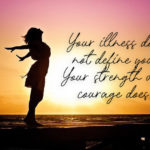