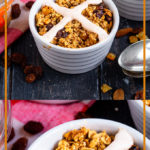 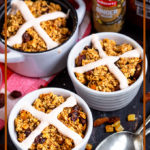 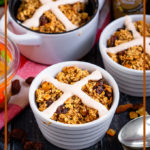 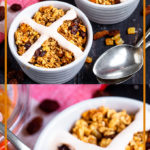 This Hot Cross Bun Baked Oatmeal is creamy, full of flavour and vegan! Either bake it in individual sized ramekins or bake a big batch; it couldn’t be easier to whip this delicious, Easter treat up.

Hiya everyone, hope you’re all alright. I can’t believe it’s April already! It’s my birthday next week and Easter. Today I have a quick, simple and delicious Easter recipe to share with you: Hot Cross Bun Baked Oatmeal. A healthier way to enjoy the flavours of hot cross buns for breakfast. It’s easy to make and vegan too. Although, you can use regular milk and butter if you’d rather.

Next week my husband is off work, so we’re going to go out for a birthday meal and do some DIY around the house. We’ve ordered a new front door, which will be here in a few weeks. We put new house signs up, a new light. We’re changing the gravel outside the front of our house next week and getting a skip to sort out our garage.

I can’t wait, I have the vision in my head of how it will look and I’m so excited to see it come to fruition. It will look super sleek and 100 times better than the old front door and gravel. For some reason, the people who lived here before have mixed about four different types of gravel. Different sizes and shapes, but in different sections. So, they’re not actually mixed together, just one area has purple, one cream. Bizarre.

I already suspected what condition I was being tested for, but this confirms it. Along with the explicit “12 weeks between tests” there’s not much else it can be. I had my second, confirmation blood test on Tuesday and now I have to wait until June to get the confirmation.

It’s been a struggle, mentally and physically. Each time I get a diagnosis or confirmation of what’s to come, it knocks me again. Even if you think you’re mentally prepared for it, when the doctor actually says it, it’s a blow.

I’m also having iron issues again; I just feel like a zombie all the time. Can’t stop sleeping etc. It’s not anaemia in the way that I don’t eat enough iron. My body just doesn’t store it, so I have to have a consistent top up alongside my diet. With all of this, it’s pretty much impossible, at the moment, to be working full time. I hope I will get back to it one day, but right now, I just have to do what I can. I hate not being consistent with content, but I’m in a constant battle with my body.

Baked oatmeal is an elevated version of traditional oatmeal. Something magical happens in the oven to create a creamy, flapjack porridge hybrid that tastes like a hot cross bun. I just love the fact you get little toasted bits on the top, but soft, chewy oats inside.

I love a hot cross bun as much as the next person. However, I wanted to try and make a healthier version with oats because most of the week I have porridge for breakfast. I love experimenting with different flavours, oats taste great with pretty much anything I’ve found.

I’ve packed a huge amount of flavour into these oats and they’re vegan too. I have made baked oatmeal with egg before, but this time I used applesauce. Applesauce fits perfectly with Hot Cross Buns as it tastes so darn good with spices.

It couldn’t be easier to make the baked oatmeal mixture. Mix oats, spices, raisins/sultanas, baking powder, sugar, salt, applesauce and melted butter together in a medium sized bowl. Then add in non dairy milk and mix until creamy.

This means mixing for a few minutes as, to begin with, the oats will just be slightly coated with milk. By continuing to mix and mix, they start to soften and the mixture will look creamy.

At this stage, spoon the mixture into ramekins, or spread it into a square pan and bake in the oven for 18-22 minutes.

After cooling, I made the cross with Alpro Soy Greek yoghurt, a little cinnamon and golden syrup. Add it to a Ziploc bag, snip the corner off and pipe a cross onto your ramekins. You can enjoy this Hot Cross Bun Baked Oatmeal warm or at room temperature, it’s truly a delicious way to start your day! 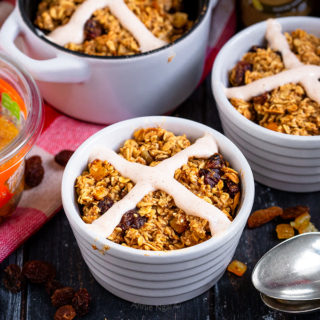 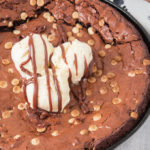 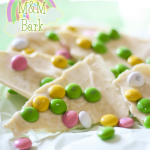 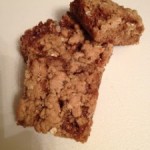 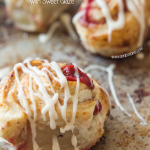